The big David and a slow day

Up early to get to our Michelangelo’s David reservation by 9. Our hotel breakfast wasn’t prepared, so we ate at a piazza restaurant, and made the mistake of sitting outside as they suggested rather than standing at the bar like the locals. Very expensive coffee, tea, and omelette mozzarella paninis. 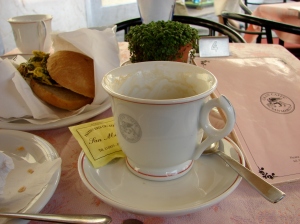 David was a disappointment to Shelly. She thought he would be larger. Oh well. I just liked seeing him again. A magnificent piece of work. We could talk about Shelly’s necessary lesson on circumcised vs. uncircumcised, but let’s not touch that. Anyway, too many tourists, student sketchers, and we were still pretty tired from the day before. So, we made this a quick visit.

Our meat market hall was sadly closed on Sundays, so we had lunch in a tiny little place just off the main vendor drag. Simple food, but good.

This became our low-key day. We hung out in our hotel lobby, me on my iPhone, Shelly on my Mac, both of us going through email, catching up on news. I tried to get all the latest Sarah Palin news. I know this election will not be decided until November, but until then, it’s like a bad game of volleyball. I know I can’t wince and close my eyes, even though it would probably be less painful. We watched the opening of Saturday Night Live with Tina Fey. Who else could do Sarah Palin like Tina Fey?

We actually both passed out for about 45 minutes from shear exhaustion. I’m not one to take naps, but I had no choice today.

This time the recommendation came from the Tourettes-affected front desk clerk. (He was talking to himself, his arm, and walking around giggling. Creepy is an understatement here.) At Ristoranti da Mimmo, we had to wait about 30 minutes to get our check, Shelly finally had to threaten that we were leaving, and then we got it pronto. We had a frito misto, not that great, Shelly’s eggplant parmagiana, was just okay. My spinach and ricotta ravioilis with a pumpkin and juniper sauce was something I’ve never had before. The Chianti classico was perfect. I even ordered the special lemon crème brulee for dessert. So far the food in Florence outshines the food in Rome.

We turned on our TV, watched some BBC and the implosion of the Lehman Brothers, and settled on a very bad Italian singing show. I will end this post as the show did with a medley of the Village People’s “greatest hits.” Close your eyes and imagine, “YMCA,” “Go West,” “In the Navy,” etc. being sung poorly in English by an Italian man and woman, all the while surrounded by conga-ing older people, also singing along and waving their hands around. Reminds me of some bad weddings I’ve attended.

This entry was posted on September 16, 2008, 1:46 pm and is filed under family, travel. You can follow any responses to this entry through RSS 2.0. You can leave a response, or trackback from your own site.