I got a sunburn in Edinburgh

After the adventures of the day before, we slept pretty hard. Woke up to a full breakfast – scone, eggs, this and that – and clear, sunny skies. So sunny that the locals were declaring it summer and donning shorts. We weren’t that brave and headed out properly attired. We hit one of the must-see spots – the Edinburgh Castle. Amazing views and very old castle-like buildings. We skipped the crown jewels and the military museum. Seen one jewel, seen them all.

Got a great Iranian/Kurdish lunch just around the corner from where J.K. Rowling wrote Harry Potter. Went to the (free) National Museum of Scotland. It was actually a cool museum. Nice to see a museum point out the history of the world in millions of years, and backing up their claims with factual evidence for doubters. My kind of place. Lots of bones, leather shoe remnants, jewelry (not of the crown jewel persuasion), metal works … fun stuff.

Is that a kilt in your pocket?

Jumped back over to the Royal mile which was basically street after street of kilt and sweater places. Wool socks, three for £5. Fisherman’s Wharf, you’ve met your match. Used the loo at Queen Elizabeth’s holiday Palace – Holyrood Palace. Decent bathrooms. Because it was after 4, we decided against tackling Arthur’s Seat, an extinct volcano (that caught fire later that night). Walked aimlessly a bit toward our B&B and then hailed a cab to Bierex, a pub we could walk home from. Had some good ale, hard ginger ale, and the standard pub veg burger and haddock meal.

A decent day and a sunburn to prove it. 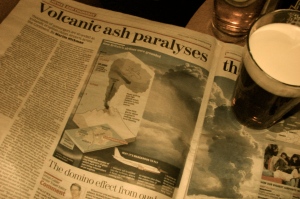 Nothing better than a pint and a natural disaster

This entry was posted on April 18, 2010, 8:22 pm and is filed under travel. You can follow any responses to this entry through RSS 2.0. You can leave a response, or trackback from your own site.