We lost Oliver on Friday. In the past two months, he was diagnosed with two different kinds of aggressive cancers. One, nasal, one in the rear. Not fair. Rather than treating one and waiting for the other to catch up, we opted to prevent further suffering and have him go out on a happy note.

To say letting him go was tough is an understatement. 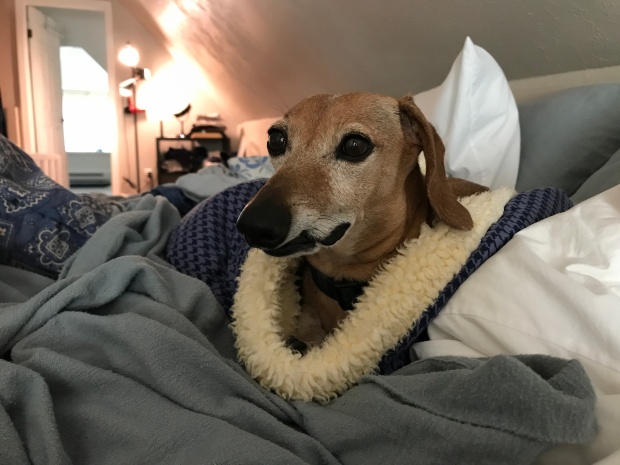 Twelve years young, Ollie should have been around for another many years. He blessed our lives just shy of 11 years and we will never forget him. He became part of our family after he had been abandoned by his first family. Left for animal control after getting hit by a car, a rescue in California’s Central Valley nursed him back to health from a broken pelvis and leg and other internal injuries over five months. We were so grateful when we were chosen as his new parents.

He became the little brother to big sister Frances. He loved road trips and traveled up and down highway 5 with us to Los Angeles. He loved taking a pee break at Anderson’s Pea Soup – he used to do this with Frances and then showed his sister Dot the car-ride ropes.

He loved visitors and family. Whoever sat down first got a lap full of Oliver and licks for as long as they could stand it.

Oliver also got himself into a fair amount of trouble too. Eating things he shouldn’t have (like chicken bones). Parts of soft and rubber toys. The 3-foot garbage can we have with a locking lid has a fair amount of Oliver teeth marks on it. Jumping off couches, chairs, tables, and the back planter area in our yard in El Cerrito. Hello fractured leg.

He loved living in the UK. I will also remember our twice-daily walks and the time a little boy said, “Mummy, look, a sausage dog.” Loved that.

Walks along the Thames, to old Deer Park, to Richmond Park, Ravenscourt Park, Richmond Green. And who can forget Friday night pub nights. He loved going to the White Horse. He even spent a night with us in Frankfurt Germany on our way back to the US. Running down an empty hallway on the floor they put people with pets, he triggered all the lights as he ran down and back.

He briefly had a little Schnauzer brother Griffin while in London and once back in the states he became big brother to 8-week old Dot. And boy, did he show her the ropes. She got her confidence from him, learned to love fruit and vegetables, got calmed by him on her first plane ride to Seattle and back.

He goes back to Piedmont Stationers and Blurb days. And boy, did he live through a lot more jobs and addresses with us. He lived with us mostly in Oakland, Burlingame for a bit, Richmond-upon-Thames, San Francisco for about 5 weeks in our first and last condo rental, El Cerrito, and finally, Denver.

He embraced the six months we’ve been in Denver. The epic 3-day car ride from California. Snow days. Squirrels (in Oakland, Richmond, and Denver). New smells. Fruit trees on every block. And to our surprise, a crab apple tree in our back yard. For months, a daily battle as we had to wrestle crab apples from him. He had quite the fruit on the ground sweet tooth.

Other than hunting down fruit trees or discarded food (he really loved living by the train station in London), he got his fair share of critters: one bird (poor thing), a rat or two, and a mole. Post-killing he was a proud boy. Ugh.

Oliver. You were the best. Your legacy lives on and we will miss you dearly.

Little Dot misses you too.

This entry was posted on September 29, 2019, 4:50 pm and is filed under dogs, family. You can follow any responses to this entry through RSS 2.0. You can leave a response, or trackback from your own site.